Join Backsberg on Sunday 15 February for the rock talent that is Bed on Bricks. Bring your friends and family, laze on the lawns and relax in a beautiful vineyard setting. Enjoy a hamburger or Karoo lamb wrap, sip on chilled Backsberg wines and listen to the chilled tunes of some of SA’s best local musicians. 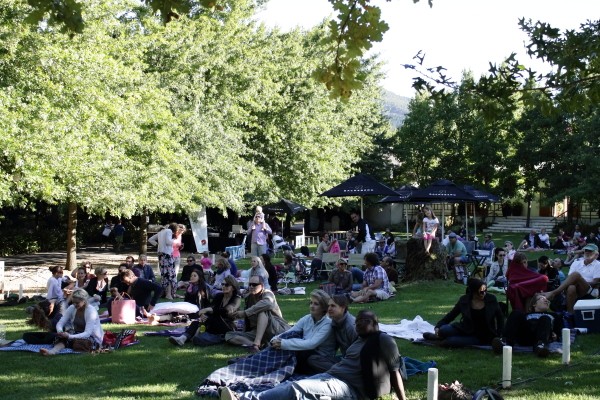 Bed on Bricks was born in 2003 in Cape Town and the band has appeared on stages all around South Africa, head-lining many local rock festivals and touring the country. They have released three studio albums (Humanarium 2003, If you see Kay 2005, and Royal Honey 2008) and a live acoustic album, Takeaways, in 2006. Singer Mike Hardy’s lyrics are smart, positive, informed and questioning. Whether they are rapped or sung, they remain inspired by life in urban Cape Town, while Schalk van der Merwe’s bass, Tim Rankin’s drums and Dave van der Linden’s guitar, are all played with intense passion and energy. Their ten year anniversary album was released in December 2013, with previous favourites remixed and remastered, as well as three brand new tracks.
The opening gig is performed by Purple Cry, a Cape Town based musical duo which explores genres of music ranging from alternative to progressive and acoustic rock, while using special intricate musical techniques in order to create a fuller sound during their performances.
Pre-sale tickets for the concerts are available from www.plankton.mobi for R100. Tickets are also available at the gate for R120 or R60 with a valid student card. Children under 12 years get in free when accompanied by an adult.

Admission to concert venue starts at 15h00, with the opening act starting at 16h00 and the main act at 17h00. Bring blankets, chairs and good vibes. For the full line-up of bands, directions, comments, and more information on the series, please visit www.facebook.com/backsbergconcerts.

We have five double-tickets to giveaway to the Bed on Bricks show this Sunday 15 February. Simply comment on this post below if you would like to stand a chance of winning a set of double-tickets. Winners will be announced on Wednesday 11 February 2015.