Gerard Holden, co-owner of Holden Manz, the magnificent boutique wine estate nestled between two rivers with majestic Franschhoek mountain views, has been inducted into the Commanderie de Bordeaux en Afrique de Sud, the South African chapter of the worldwide Commanderie that unites wine lovers with a passion for Bordeaux.

Gerard, former chemical engineer and formidable mining financier, is one of 14 new members inducted into this prestigious organisation.

Recognition by the Commanderie cements the dedication of Holden Manz to uphold great wine standards and exceptional quality for Bordeaux-style red wines on South African turf.

The Holden Manz tasting room is open daily from 10h00 to 17h00. Call 021-8762729, e-mail wayne@holdenmanz.com, visit Holden Manz on Facebook or www.holdenmanz.com. To reach Holden Manz, turn right at the Huguenot Monument in Franschhoek and follow the signs for two kilometres. 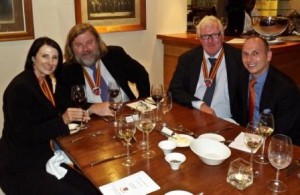