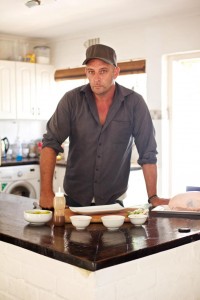 Exciting cuisine, infused with a love for good food and vast experience in the restaurant industry cooking for celebrities, beckons at Holden Manz with the appointment of seasoned chef Cheyne Morrisby at the Franschhoek Kitchen, the signature restaurant at this magnificent wine estate.

“We are delighted to announce the appointment of Cheyne as Executive Head Chef and look forward to savouring his new style of cooking at the Franschhoek Kitchen,” says Gerard Holden, co-owner of Holden Manz.

Working closely with the Franschhoek Kitchen team who shape their menu around the fresh seasonal ingredients from the estate’s own vegetable garden, fruit orchard and chicken coup, Cheyne is planning some exciting new culinary ventures at Holden Manz. With tapas as one of his great passions, Cheyne promises a host of new tantalising dishes and flavours on the Franschhoek Kitchen menu.

A well travelled chef, Cheyne discovered his passion for cooking during his national service in the South African Navy and honed his skills at some of Cape Town’s finest restaurants. What started out as a yearlong break in London soon took him on an eleven year journey through leading restaurants, travelling to Asia and boasting an impressive celebrity clientele from Kate Moss and Robbie Williams to Kylie Minogue.

Cheyne lists keeping up with worldwide trends and a simple, effective approach to cooking as key to his culinary craft: “For me, food has come full circle. Fine dining is all about good, simple flavours. There has also been a huge amount of focus on small artisan producers.”

His love for cooking shines through in every dish he prepares. In addition to a host of tapas dishes, one of Cheyne’s all-time favourites, roasted pork belly is sure to take centre stage on the new Franschhoek Kitchen menu. Served with potato and coconut croquette and drenched in a duo of sauces – a spring onion, ginger and rice wine puree and a red kimchi sauce, this is a great choice as the vines start changing colour with the approaching autumn chill. His crispy duck, served with watermelon, crushed cashews and sweet miso is another sure winner.

The Franschhoek Kitchen is open for lunch and dinner from Tuesdays to Saturdays and Sundays for lunch. Call 021-8762729 or e-mail wayne@holdenmanz.com for bookings. The Holden Manz tasting room is open daily from 10h00 to 17h00.