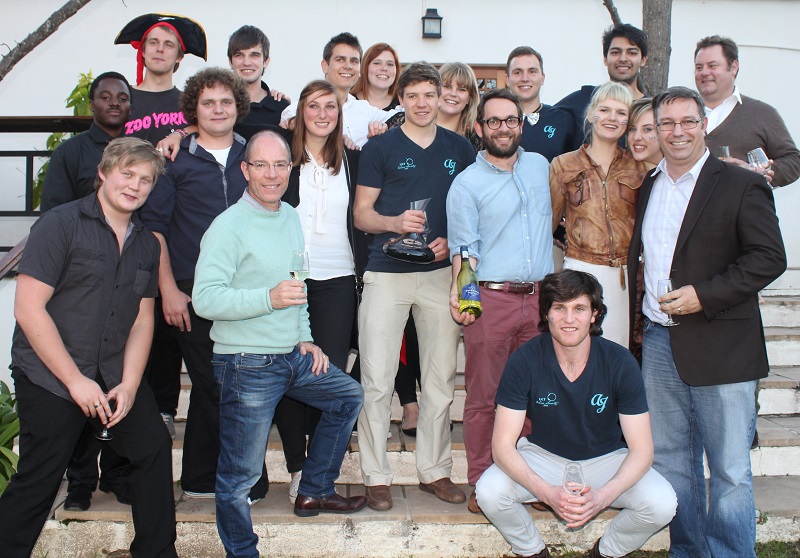 The skies were clear blue last Friday afternoon as the competing teams entered the arena for the 6th annual Vino Varsity Challenge. Tuks arrived early with time to spare for some on-site preparation. Ikeys pulled up with a team of blue-clad supporters and Maties donned face paint and pirate hats.

Vino Varsity is an inter-varsity wine-tasting competition where university wine societies are given a platform to show off their wine knowledge and tasting skills. The competition encourages wine appreciation on campus, develops young, refined wine drinkers and celebrates wine. Backsberg aims to get the wine societies involved, networking and competing on a national level in a fun environment.

Teams tackled 30 general knowledge questions covering wine history, winemaking and international wines. Ikeys played their A-game in this round, getting almost every question right. Tuks huddled together on answering the questions and used their option of ‘phoning a friend’ to answer two questions, but not even this tactic could save them. Maties started off slow but they managed to pick up the winning pace towards the second set of questions. This was nail-biting stuff.

All was not decided just yet; round two commenced and Ikeys confidently sailed through the tasting questions scoring winning marks for blind-tasting ten flights of wine. Teams had to identify cultivars, origins, vintage and faults, amongst other tough questions. Tuks and Maties drew in this round to everyone’s surprise, giving Tuks a chance at catching up. With Maties now on a back-foot, murmurs erupted from the crowd “Maties! You have to hold on to the title!”

The competition would be decided in round 3. Teams debated the topic of how important Terroir is in a South African setting. In their argument they considered this question from the perspective of the consumer, the producer and the trade. The judges for this year were André Morgenthal, WOSA Head of Communications; Neil Grant, Chairman of the South African Sommeliers Association; and finally Ivan Oertle, Woolworths wine buyer. They were on hand to give relevant commentary, opinions and clever wine wit.

After three rounds of war cries, encouraging team chants and general team banter the judges tallied the scores while the contestants and guests enjoyed yet more wine.

Ikeys were crowned the Vino Varsity Challenge Champions for 2014! They regained this title after Maties held it for the last three years. Ikeys enjoyed the success with a bottle of 2004 Klein Babylonstoren straight from the decanter trophy – in true winning style! Maties achieved second placed and Tuks third position but everyone celebrated together on a great challenge and fun afternoon. Nick Hoernle from Ikeys concluded in saying: “We are so pleased that the trophy is back where it rightfully belongs! Go Ikeys!”