Over the past 18 months approximately 60km of mountain bike trails have been established in the area around the Berg River Dam. This has put the Valley on the mountain bike map – Franschhoek is now a destination for weekend mountain bike enthusiasts plus it offers challenging routes for larger mountain bike events (such as the Cape Epic, which is coming through Franschhoek in March 2017). 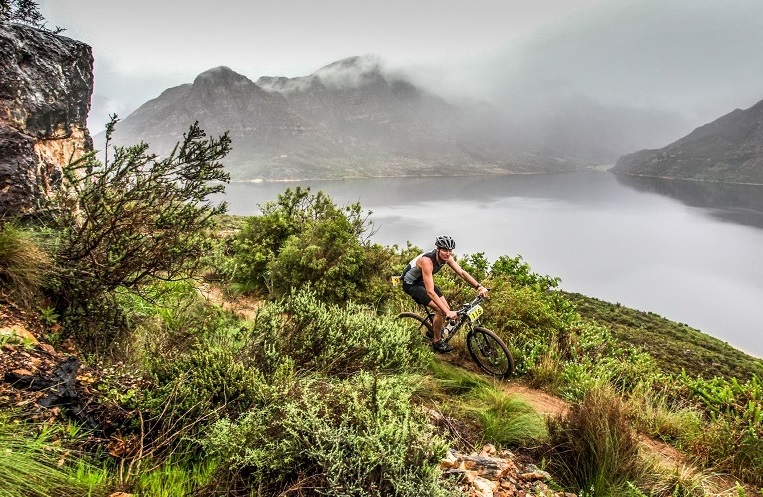 Equally important has been the establishment of a primary co-operative, The Golden Leaf Trails, to rehabilitate, maintain and build the trails. Golden Leaf started with four members and has expanded to nine, all of whom are growing their skills for building and maintaining cycle trails.

The members of the co-operative are responsible for themselves and for finding their own employment. They are their ‘own boss’. Significantly, this process can be used as a blueprint for future entrepreneurial opportunities for community members.

The process is already being repeated with the introduction of a security ‘hut’ and security staff at the gate on the Robertsvlei Road.

The security staff are currently collecting information about who and how many people are running, walking, cycling, working, etc. on the roads and trails behind the Dam. Apart from knowing who is in the area, security staff also ensure that any parked cars are safe. In time roving security staff will be introduced.

A further opportunity that has been created is the need for mountain guides. Community members who are interested in guiding people on walks, hikes, etc. are being identified. There are ‘learn on the job’ opportunities as well as more formal training opportunities, such as those offered by FGASA (Field Guides Association of Southern Africa).

Franschhoekers have been walking along the paths and in the mountains around the Dam for many years. The creation and formalisation of the mountain bike trails has prompted the need for a permit system for entry to the area, similar to that for the Mont Rochelle Nature Reserve.

Hikers, runners, cyclists, etc. will be requested to have their permits on display or show them to the security at the gate.

Permits are similarly priced to Mont Rochelle and the money raised will be used to maintain the trails and pay for safety and security staff.

Initially safety and security personnel will be at the gate, but the intention is to have ‘roving rangers’ monitoring the area. Vehicles parked at the gate will be under the watchful eye of the security staff.

Children under twelve years do not need to pay for a permit – but for security reasons they do need to be recorded in the log book at the gate so security personnel know who is in the area at any given time.

Permits will be sold at

Additional permit sales outlets will be considered and introduced as the need arises.

In due course ‘SnapScan’ facilities will be available at the security gate and other entry points.

Annual permits can only be purchased at the FWV Tourism office.

Please contact the Franschhoek Wine Valley Tourism office at 021 876 2861 for any queries.