As the University of Cape Town and Stellenbosch buses pulled up at Backsberg last Friday, there was a perceptible tension in the air. Faces painted and flags waving, it was clear that that the UCT Wine Society was determined to retain the title. Likewise, Stellenbosch, was ready to give it their all. Add into the mix the unknown Pretoria Wine Society, who was competing in the Vino Varsity for the first time, and the afternoon was set for a vinous battle.

Pre-drinks consumed at a fast pace, the competition started with introducing the judges. The 2012 panel consisted of winemakers Richard Kershaw (MW) and Tariro Masayiti, and Ogilvy SA Head of Digital Innovation Chris Rawlinson.

This year’s Backsberg Vino Varsity comprised three legs: a general knowledge section on wine history, winemaking, and wines of the world; a blind tasting to identify styles, regions, varieties and faults; and a presentation in which each team had to argue around the topic ‘What is more important – what’s in or outside the wine bottle?’.

The competition was fierce. Maties edged the general knowledge section over Ikeys, with Tuks just off the pace in third position. ‘We prepared hard for the general knowledge section,’ said Melissa Marias, Tuks captain. ‘We were definitely the underdogs coming into this competition, but we were determined to prove that Pretoria is about more than just brandy and coke.’

The second section saw Maties dominate the blind tasting, pulling away from the other teams. This round also saw one of the biggest upsets in Vino Varsity history, with Tuks beating Ikeys into second place. ‘Our tasting skills really let us down today,’ says Doug Hoernie, captain of the UCT squad. ‘Last year we hammered Stellenbosch, so we are very disappointed with today’s result. We will have to come back stronger next year.’

The final round saw both Maties and Tuks stumble in their presentation. Ikeys, on the other, showed off their sharp debating skills, arguing deftly that what was outside the wine bottle was indeed more important. ‘UCT nailed the presentation,’ said Chris Rawlinson. ‘The other teams were simply no match.’

The final scores were tallied, and to cheers of celebration it was announced that Maties had taken the Backsberg Vino Varsity 2012. ‘After being beaten by UCT last year, we knew we had to pull up our socks this year,’ said Maties captain Bryce Gillespie. ‘We have put in hours of practice for the competition and it paid off.’  The Vino Varsity Trophy, a decanter, this year filled with a bottle of Backsberg Klein Babylonstoren 1992, was presented to the victors, Maties.

Simon Back, Backsberg Marketing Manager, says the Backsberg Vino Varsity Challenge continues to grow, and is capturing the imagination of university wine societies. ‘In previous years we have had Wits, and Rhodes participate. It was brilliant to have Pretoria here this year. We plan to reach out to more universities in the future,’ he said. ‘The vision is to take the competition to a national level.’ 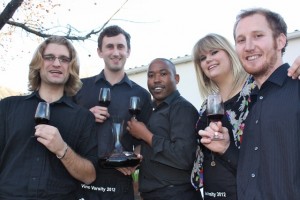